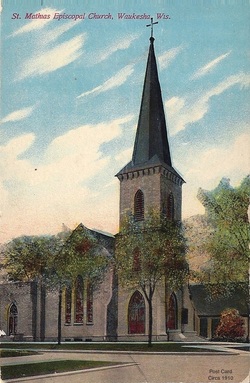 The church building was finished in 1853 and consecrated in 1855. The Lady Chapel was added in 1887.
A Short History of St. Matthias, by Nancy Harland

In 1841 the village of Prairieville, now Waukesha, was 5 years old.

The Rev. James Lloyd Breck and two other Episcopal Missionaries had accepted the call of missionary bishop Jackson Kemper to move from New York City and start mission work.  Their original intent was to establish a new "religious house", sort of a protestant monastery, but they found it difficult because the area was "growing fast and boom prices made it out of the question".   Eventually, they would found Nashotah House seminary near Delafield.  In the mean time, they ministered to several Episcopal families in the village. The first entry in the St. Matthias Parish register is the Baptism record of Henry and George, the sons of Joel and Mary Marsh - two years before the formal organization of the parish.

It was the same Rev. Breck who called a meeting in Prairieville to establish a permanent parish.  According to minutes of that meeting held on April 18, 1844, "on motion" he was asked to give a name to the new parish and he chose St. Matthias, the apostle elected to replace Judas.  The group first met in a small barn-type building, given by William A. Barstow, located near South St. and Barstow Ave. It was made "more churchly" with paint and hand-made furniture. Later, on Easter Monday, April 9, 1847 it was voted to change the name from St. Matthias Episcopal Society to St. Matthias Episcopal Church and to incorporate itself.  St. Matthias was chartered by the Wisconsin Territorial Government.

The next year Mr. Dakin, Mr. Pratt and Mr. Samuel H. Barstow were appointed to purchase a suitable location. I n 1850 the three men secured plans for "a stone church of Gothic architecture". Plans were modified due to cost and difficulty in fund raising.  A cornerstone was laid on June 13, 1851. As work progressed, "a series of misfortunes" began. Some contributors offered to pay their pledge by giving stone, lime, lumber, and other supplies rather than money. Builders were not paid on time.  The then-rector, Rev. James Abercrombe, later stated " These difficulties being got through with our church, as we hope by a loan, completed, this parish must be, on a permanent basis, and we, in the providence of God, shall have been permitted to put it there - for which future generation shall bless us.

The first service was held on June 12th, 1853. In that year the renting of pews provided the regular income to pay the debt remaining. The building and real estate had cost $5,222.02 according to the building committee. An important milestone was reached when in 1858 the renting of the pews was abolished and St. Matthias led the way for other churches following that decision.
Through the years there were many "ups and downs". The women held many "sociables" to raise funds. An organ society was formed and the first pump organ in the area was purchased. Later a 1500 pound bell was purchased with the help of collections of pennies from the church children. Lovely stained glass windows were installed in memory of parish members and additions to the church were made.  A mission congregation, St. Phillips, was established and existed for many years before being folded back into St. Matthias.
For several years, St. Matthias was the home for the Cooperating Congregations of Waukesha County meal program, which is now housed at Hope Center. In the winters of 08/09 and 09/10, St. Matthias housed the Waukesha County Temporary Shelter for Men, administered by Hebron House of Hospitality.

Anecdotes and News clippings
Historical bits about St. Matthias found published in the Waukesha Plain Dealer and the Waukesha Freeman:

"Mr. and Mrs. Kimball, owner of the mill in 1850 were earnest workers for the church which was being built. Their home was always open to dear old Bishop Kemper and visiting clergy as no rector was yet had. The students who came over from Nashotah to read services were cared for. They had a room in their home called the "Profets Room". Services were held in the old court house while the church was being built. Those family visits must have been a delight to those students far from home"

Another bit of history - "the building is of the best Waukesha limestone situated on the corner of E. Division and Main St. It has an exceedinqlv substantial tower tastefully finished on inside and has a good pipe organ, Very near where the foundation was laid was the head of a famous turtle mound, one of the largest and most interesting relics of the prehistoric nations found in the Fox River Valley. Before the church was begun, this mound had suffered more or less despoliation, and was entirely destroyed.  It is a pleasant theory with some truth that this "turtle" was built as an object of worship. If so, the present Episcopal Church, another structure of worship, is but a continuation in another form and further refinement and civilization, of the material evidence of religious tendencies which have existed for unknown centuries.”

Waukesha Freeman, Oct. 1861 – “Regular services will begin on every Sabbath at the Episcopal church in the village. Mr Corbett has been permanently engaged and Bishop Kemper will visit monthly to administer Holy Communion. The services of this church cannot but prove interesting and beneficial to morals and religion"

Waukesha Freeman - 1868 "The ladder taken from the front of St. Matthias's Church is the property of Robert Gregory. Will the party having said ladder return the same immediately to him. Unless it is returned it will not lead the holder to heaven."
Waukesha freeman 1922 - about the St. Matthias boy's choir..."The boys looked very angelic in their long white linen surplices, each with a hymn book in hand and eyes rolled devotionally upward. However they looked, those boys were little scamps and the mischief they didn't do was ordinarily only the mischief they didn't think of. Fixing the bellows for a quarter, a boy worked the bellows to emit a distressing treble wail. Another time a mouse was given his freedom and Miss Jackson shrieked in terror."
​
St. Matthias and Waukesha were always good Neighbors.  Parish members have rolled bandages during the civil war, served meals to the poor, housed homeless and welcomed it's neighbors.
Look at original documents on the Archives Page